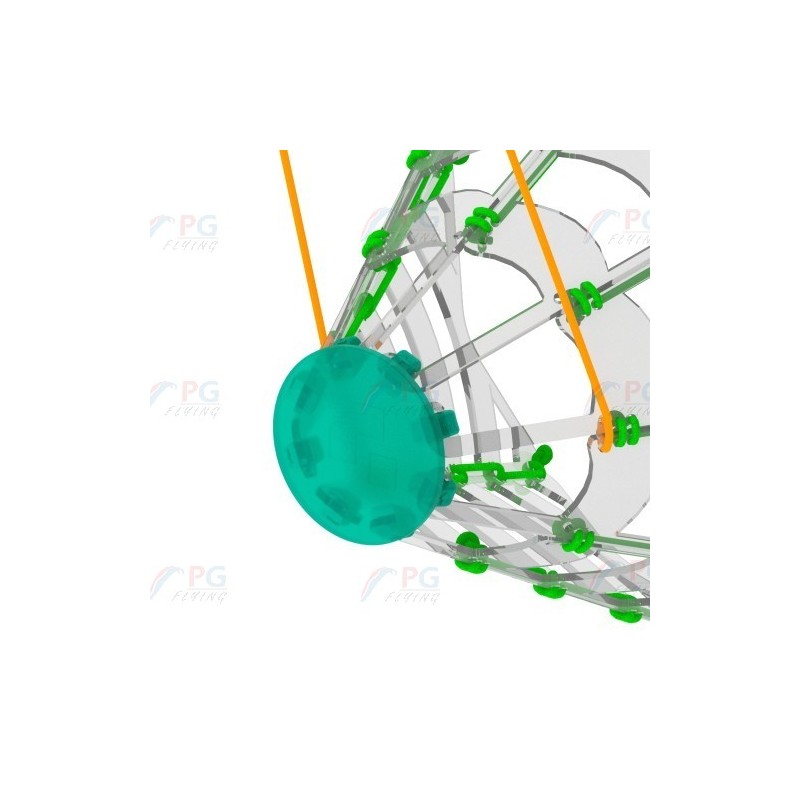 This ChaseCam model has an universal platform that allows you to mount almost every action camera. Since each camera has a different weight and dimensions, adjustments such as balancing and correcting rope length will be necessary. Universal platform serves for sticking an adhesive camera mount.

There are 2 sets of wings you can select: bigger and smaller ones

Balancing procedure may be different in combination with different types of gliders and desired video scene.

SkyBean ChaseCam is a unique product that will allow you to capture an amazing video of your flight from an angle never seen before. Re-live your adventure from a perspective of an eagle following you throughout the entire flight. The ChaseCam allows  you to share your flying experience with friends and loved ones.

We upgraded the design for maximum security of your action camera. Fix the camera in the ChaseCam housing with the silicon band. Silicon band is including in the package. Housing for GoPro Hero Session does not need silicon band.

ChaseCam heads are produced with the newest technology of 3D printing. Those prints are heat sensitive. Do not leave ChaseCam in hot / sunny places for long time. Product can not be exposed to long-term pressure. After using ChaseCam do not leave camera inside and let loose silicon band so it does not deform the head.

SkyBean ChaseCam weight is only 170 grams. In normal flight (approx. 40km/h), it produces about 1.5N brake force, enough to fly a safe distance from the lines.

SkyBean ChaseCam is connected to the canopy with bungee rope, stretched only 13% during normal flight, what brings extra safety in case it is accidentally tangled up in the lines. Please read user guide on our support page.

SkyBean ChaseCam was developed especially with a focus on safety. During normal flight, ChaseCam flies behind far enough with no adverse effect on the glider or flight speed. We know, as active pilots, what can happen in the air and because of that, we also tested SkyBean ChaseCam in non standart flight situations.

When you activate your speed system or when you turn a spiral, increased speed will produce more brake force and the bungee rope will be stretched more, therefore ChaseCam will go further away from the glider, and  then the photo image takes in the entire canopy and pilot. There is some possibility that  ChaseCam will tangle if incorrectly exiting from a spiral, like during a big wing-over. You can see a little kick in what is captured when you enter or leave a strong thermal, but don't worry, safety level is high. Small wing-overs will bring ChaseCam closer to the lines with nice video effect. Really big wingovers can tangle ChaseCam into the lines, but with no safety concern; the photo image will temporarily face elsewhere. During asymmetrical collapse, dynamic or held, the glider is still moving forward, so ChaseCam still produces braking force, so this maneuver won't tangle the ChaseCam. A dynamic frontal stall is usually recovered very quickly with some altitude lost, which will ensure no adverse effect on the ChaseCam's position from the glider. During a B-stall, the glider will lose its forward speed, and therefore ChaseCam can be tangled in the lines, particularly if you pull it dynamically.

chat Comments (0)
No customer reviews for the moment.

Are you sure that you want to report this comment?

Your report has been submitted and will be considered by a moderator.

error Your report cannot be sent

Your comment has been submitted and will be available once approved by a moderator.

error Your review cannot be sent